Helloooooo! Can you believe it’s already Wednesday? It seems like I was just posting a WIAW…

How is your week going so far? Mine is going pretty well, especially today, because the sun is out and election commercials are OVER. Whew.

Before I start, I just want to share this hilarious picture of Ella. We were eating dinner and looked over to see her like this on the back of the couch:

It was so funny! She’s always liked to contort into weird positions and sit in strange places, but this was a new one. Even though I think she was comfortable (she didn’t move!), my dad joked that it was almost like she had gotten stuck but was too embarrassed to bark for help.

WIAW, hosted by Jenn over at Peas and Crayons, has a returning theme for this month:

Huh. So as it turns out, I did not take any pictures of my breakfasts this past week! I suppose it was because they were mostly same ol’ same ol’ Greek yogurt or protein smoothies. So, instead, I’ll include links to some of my favorite breakfasts:

I had some goooood lunches this past week. One of them was (leftover) pizza from Pizza Hut.

I always order their thin and crispy crust (because I figure I might as well reduce carbs/calories when I can; plus, it’s really good!) with pepperoni and green peppers on it.

Another great lunch this past week was this salad.

Mixed greens, baked chicken, string cheese, strawberries, grapes, and balsamic vinegar. It was so simple but so delicious! I love that sweet/tangy flavor the strawberries and vinegar have together. 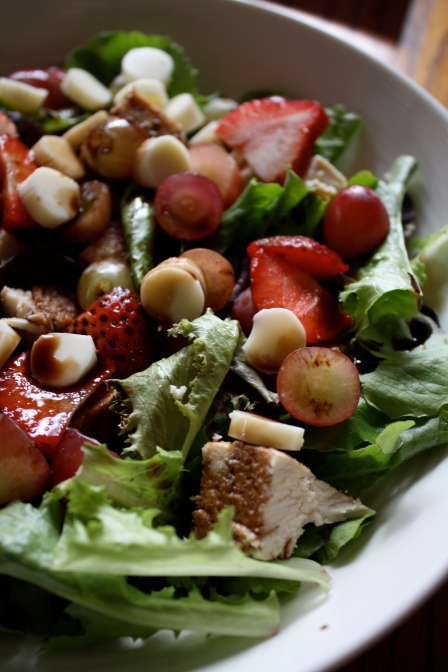 Other lunches included leftover spaghetti squash. I mixed up some with spaghetti sauce, pesto, provolone, pan seared tofu, and mixed veggies. It was so good!

The spaghetti squash kind of surprised me. I knew that it was a squash, but it looked so buttery and delicious after I had baked it up that I think I expected it to taste like pasta.

It doesn’t (because it doesn’t really have a taste), but it acts as a great vehicle for sauces or as a base for Chicken Parmesan!

I’ll write post on how I baked it up soon.

I grabbed a bag of these honey wheat pretzel twists the other day. They’re addictive. And I  may or may not have finished off the whole bag in one sitting and spent an extra half hour in the gym the next day because of it. 😛

Tortilla chips are another one of those foods that I typically can’t stop eating once I start. However, I managed to keep it at just one serving on Sunday.

I made up a big mug of hot chocolate over the weekend. With marshmallows on top, of course. I also added about 1/4 cup of my dad’s morning coffee to try and take away some of the sweetness.

Unfortunately, it still was just too sweet. However, that didn’t stop me from enjoying melty marshmallows, or taking pictures of it! 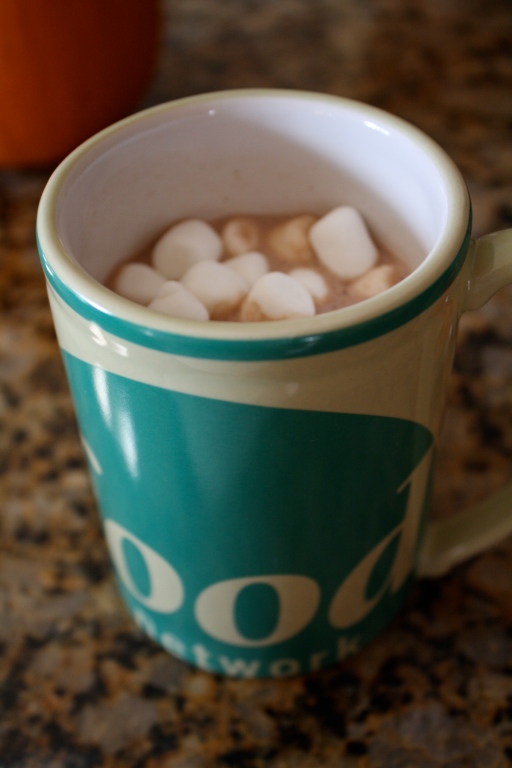 I really have only one dinner to talk about from this past week, but it sure was a good one! My whole family (including Ella) went over to my grandma’s this past Saturday for a birthday dinner for me and my dad. We meant to do it the weekend before, but my mom wasn’t feeling well, so we postponed.

On the menu: pot roast (I don’t know what my grandma does that makes it so good, but it is AMAZING) with carrots and potatoes, salad, fresh fruit, and homemade bread. 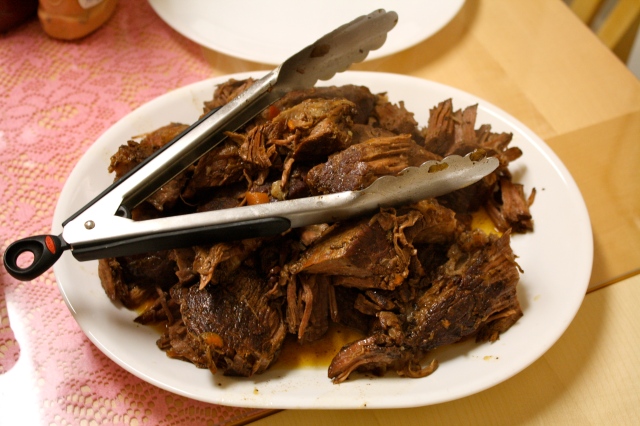 I typically don’t even like red meat. The thought of a steak makes me gag, and I rarely eat ground beef. However, my grandma’s pot roast is so good I specifically asked for it! Now that tells you something. 🙂 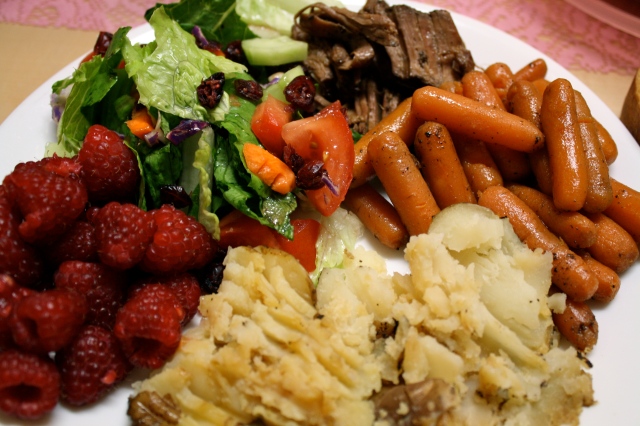 To accompany our wonderful dinner, my grandma baked up a chocolate cake.

She used the same recipe as I did in this lemon cake I made for my dad – a box mix but add or subtract ingredients to make it egg-free. I really need to put up that recipe, too…

My grandma bought this incredible vanilla bean ice cream to go along with it, and I discovered that mixing up the cake crumbs with the ice cream made everything taste like an Oreo McFlurry. Heh. Win!

And, because my brother doesn’t like chocolate, my grandma also made these pretty pumpkin muffins. They had egg in them, but judging by the fact that Ian ate three in 5 minutes, I guess they were good! 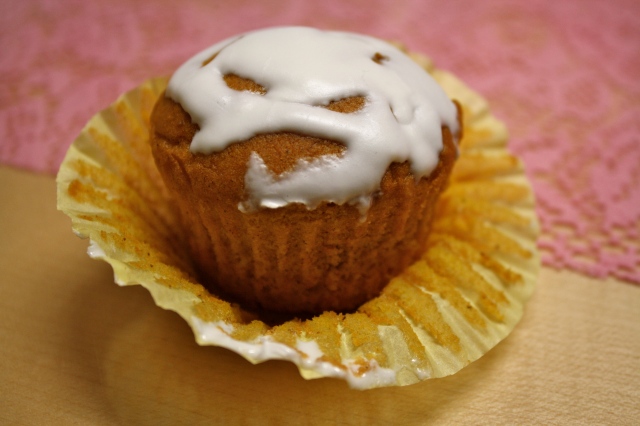 It turns out that he had never tried anything with pumpkin in it before…the cupcakes I had made over Labor Day weekend went too fast and he never got one! Oh well, I guess this just gives me an excuse to make more pumpkin goodies.

In other news, I currently have about 5,264 recipes bookmarked, pinned, or starred on my Google Reader that I’m considering for the Healthy Thanksgiving Challenge hosted by Kathy over at What Would Kathy Eat?. 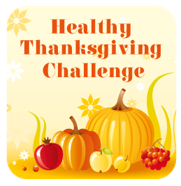 I’m excited to get cookin’!

Looking a bit more ahead….Christmas commercials are starting to play! YAY! Yes, yes, I am that annoying person who likes it when Christmas starts nearly two months early. I love anything and everything to do with the season, and these commercials make me so happy! They haven’t started playing music on the radio yet, but it’s coming soon, I can feel it! (Wow, there are a lot of exclamation points in this paragraph. I guess that just goes to show how excited I am. 🙂 )

One of my absolutely favorites was one I saw last year in England.

(Note: if you only see the URL, you might have to click on over to my site to see the actual video!)

It’s such a good message, and I just love the sweet face the little boy has at the end.

I’m going to end this post with a few pictures of what I was doing a year ago tonight. As part of the British Life and Culture class I took while studying abroad in London, we got to see a show at the National Theatre. It, too, was included in the price of the class! So cool.

The building itself is actually pretty boring and – dare I say it – ugly on the outside. So, I took pictures of the inside before the show started.

We saw “In the Kitchen”. It was somewhat interesting, but a number of people fell asleep during it. Still, it was such a great experience.

My favorite part of the night, though, was stepping out onto the back balcony after the show. What amazing views. 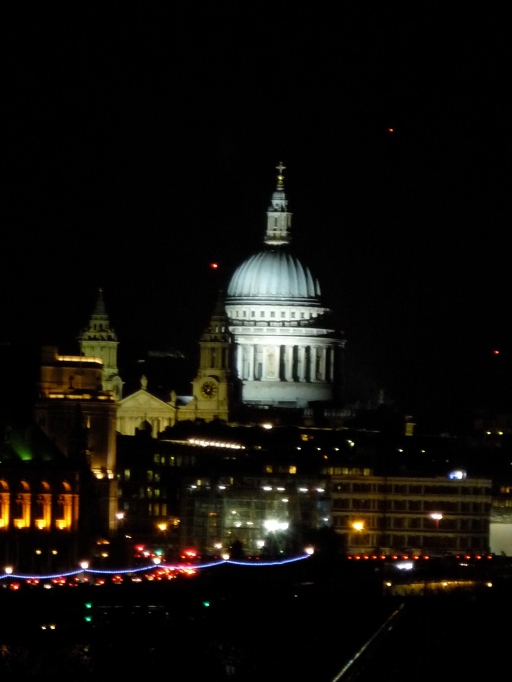 Question: Have you ever seen a theatre production/musical? Which one is your favorite?

I saw The Lion King on Broadway a few years ago, and that was amazing. I also saw Beauty and the Beast at the Kennedy Center when I was very little, but I remember it being fantastic as well. As far as theatre productions, you can’t go wrong with Shakespeare in my opinion! 🙂

Well, that’s all I have for today! Have a great afternoon!