Back At It…For Real

I’ve missed you all! It’s been over two weeks since I last checked in. Yikes. (As a side note, thanks to all of you who checked in on me! You’re all so sweet. 🙂 ) Anyway, my absence is partially because I have been so busy, but also because of those blog problems I was dealing with. In the end, I decided not to switch to self-hosting – at least not for now. I don’t have the smarts to be able to keep my site updated, virus/spam free, etc., so I’d have to pay someone to help with that, in addition to paying for self-hosting. I definitely don’t have extra money for that right now, nor do I have the time to worry about making the switch. So, I settled on purchasing a bundle from WordPress that includes all that I wanted. I’m good with it. 🙂

To kind of jump into the middle of things again, I wanted to do a combination Week in Review and What I Ate Wednesday post. This is by no means organized – I’m sort of writing down the thoughts when I have them!

Thanks to these two lovely ladies for hosting. 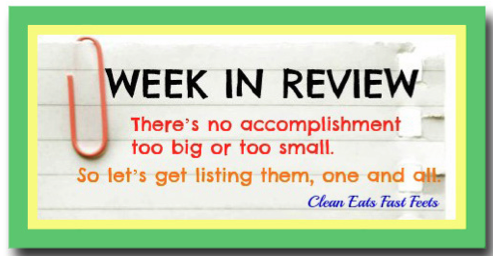 This is so long overdue. Bless you if you read it all, but if not, I understand. 🙂

Well, thanks again to those of you who read it all. If you’ve skipped to this part, no hard feelings. 😉 My next couple of posts will be more organized, but for now, I’m just glad to be back!

I’ll hopefully have the time to catch up on other posts this week, but if not, my goal is to get ahead over the weekend. I’ve missed blogging!

Have a great day, everyone!