A Photo A Day: Sound 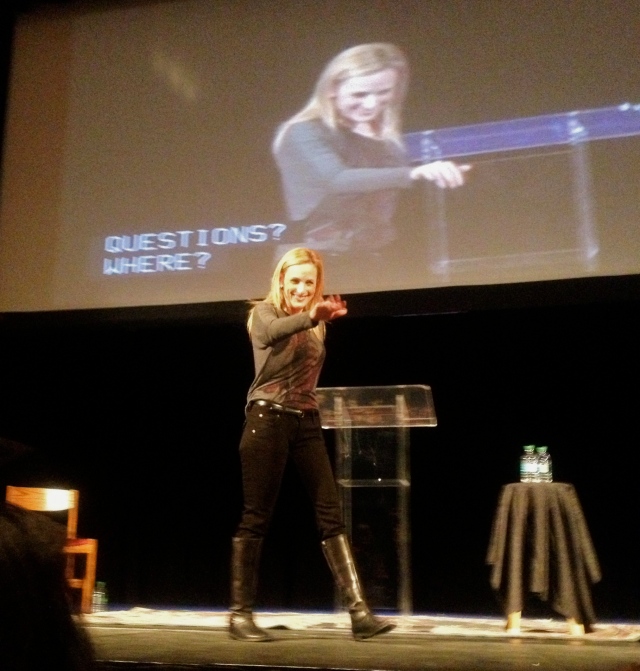 (The image that I uploaded to Instagram yesterday was the announcement for this event; for this blog post, I decided to upload an actual picture from it.)

Are any of you familiar with or know of Marlee Matlin? For those who don’t, here’s a tiny rundown of who she is: Marlee is an Oscar-winning deaf actress. She lost her hearing at 18 months old, for reasons doctors still don’t know. She has been in many movies and TV shows, most recently ABC Family’s Switched at Birth.

I don’t know that I’ve ever mentioned this up on my blog, but I have a few relatives (my mom’s brothers and sisters) that are deaf/hard of hearing. So, naturally, I’ve grown up surrounded by conversations in American Sign Language and even a bit of deaf culture. I kick myself every day for not knowing more, as I’d be better able to communicate with them, but I am trying to learn. Anyway, when I heard Marlee Matlin was coming to my university to speak, I was so excited. I went with my friend and her fiance, who is hard of hearing, and we got second row seats. It was so cool!

Marlee talked about many things, but started off with a bit about her story and her struggles. She’s in her late 40s, and when she was diagnosed as a toddler, very few people around the nation knew “what to do with” deaf children. Up until age five, she was taught to lip read and communicate through sound, which as you can imagine, was difficult. She was taught ASL at age five, which she remembers as one of the most incredible times of her life, as a whole world was opened up to her. She realized for the first time that there were other people out there like her.

At age 12, Marlee met the famous actor Henry Winkler, who she credits as one of the most important people in her life. He knew about her “disability”, and even though her mother warned him to not get her daughter’s hopes up about acting, Henry told her that she can do anything she wants as long as she has the will and keeps that dream. (As it turns out, he has dyslexia, and was called stupid by his teachers when he was younger. He realized that Marlee would have a harder time making it in Hollywood, but that it was possible.)

Marlee won an Oscar at age 21 (the youngest person ever) but was immediately shot down by reporters and skeptics who thought her win was due to a “pity vote”, not her actual acting ability. In short, this hurt her but also inspired her to work harder and harder and prove herself to the world that sure, she is deaf, but she is first and foremost a wife, mother, and actress. 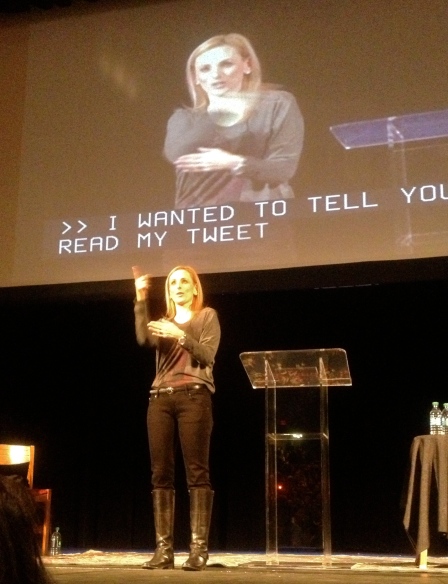 It might seem like a stretch, but I thought this speech was a perfect match for yesterday’s Photo A Day prompt, sound. Marlee signed throughout, but she had an English interpreter who spoke what she was saying. In addition to those two, there were two more ASL translators there just in case. In addition to that, they were taking a video of her and projected it up on a screen behind her, with closed captioning scrolling the whole time.

I’m not going to pretend to know a whole lot about deaf culture. I just know what I know from my family. But if you think about all of the different ways language was being “heard” last night, it really is amazing. You could get all science-y on me and claim that sound is a direct product of sound waves (or whatever), and nothing more than that, but I would argue that sound can be felt and seen, too, as it was at Marlee’s speech last night.

What do you think?

Do you have any experience with sign language, deafness, or hearing loss?

Do you think sound is purely what we hear through our ears, or that it might be more than that?