I have to say, as crazy and hectic as it feels at times (having to worry about books, room locations, syllabi, etc.), I really do like the first week of classes. Everything is at such a nice, slow pace, and it seems as though I have an eternity before that unit plan, essay, or project is due. Yes, I know those nice feelings will go away verrrry soon, especially once I start working, but bear with me for now. 🙂

Plus, I have some pretty cool classes lined up for the semester: Creative Writing, American Lit (1865-present), my teaching methods classes for both English and history, and a Special Education course. This is the first semester in which I am not taking a class that is strictly required/I’m not fully interested in. Can’t complain about that! (At least, I hope I’m not complaining soon about the amount of reading and writing ahead in the next 16 weeks. 😉 )

If you’re just starting back and school or work this week, I hope it’s going just as well as mine, or better!

I will admit, I did not like was leaving home after vacation. Now, I’ll start off by saying that I am so so thankful for this education I am getting, the apartment I live in, the friends I get to see daily, and just this whole university opportunity….but I really do like being at home with my friends and family and favorite creature comforts.

And yes, I say “worst thing” even including leaving my family, because at least with my family I have social media or texting, but my puppy does not know that I will be coming back, and I have no way of communicating with her. 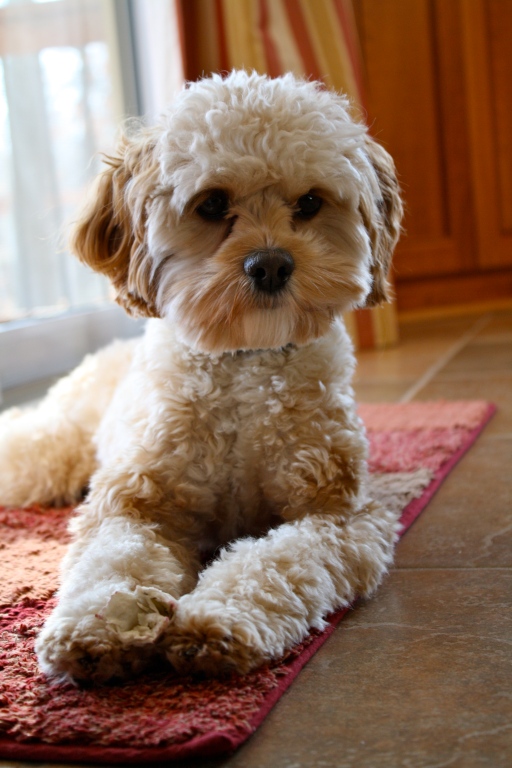 I mean, have you ever tried texting when your thumbs are up on your wrists? Yeah, me either. But it can’t be easy. And she’s afraid of Skype and the phone, so that’s out.

Anyway. I have a problem that you are probably tired of hearing about, so I’ll stop talking about my puppy and get on to the good eats!

I only had one breakfast this past week: Greek yogurt + Special K + raisins. I actually wake up craving this stuff, excited to eat it. Does anyone else get that way about breakfast? 😉

The other day I needed to whip up a quick lunch that wouldn’t leave me too full for dinner. It wasn’t the healthiest idea in the world, but a grilled cheese sandwich sounded so amazing and perfect at that point that I did it.

It had cheddar and Swiss cheese in the middle. Yum!

Another amaaaaaazing lunch that I enjoyed was this spaghetti squash boat. I got the idea from Courtney and decided to quickly whip one up. I microwaved the squash and used a fork to get all of the little strands out. I then combined the “spaghetti” with pasta sauce, mixed veggies, and shredded chicken. I put that back into the squash, topped it off with lots o’ cheese, and broiled it for a few moments.

It was so good. I couldn’t eat the whole thing, so I saved half for leftovers!

Nothing too notable in this area, just an old favorite: a rice cake with sunflower seed butter and jelly. Plus an apple on the side. 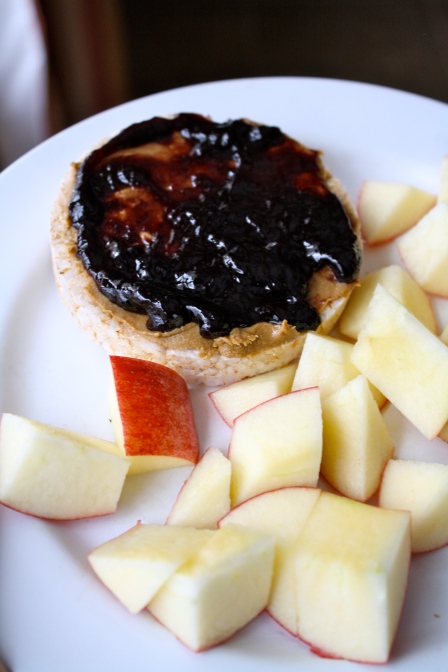 For some reason, I really love eating apples chopped up like this. I have no idea why, but I’ve been doing it for years now. 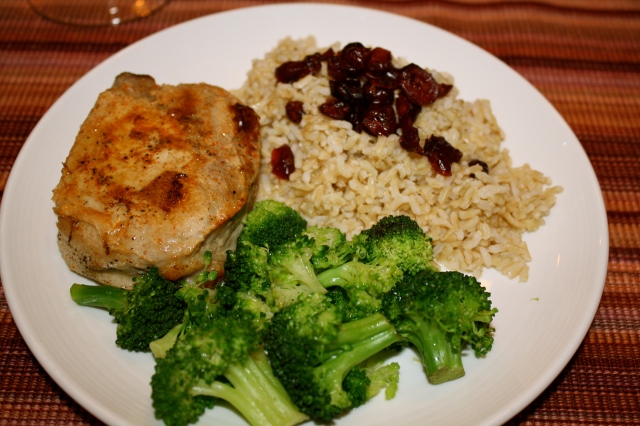 Slow roasted pork tenderloin + Craisins (that combo is seriously amazing!) , parmesan peas (I just sprinkled some cheese on top while they were still hot), and a hasselback potato. 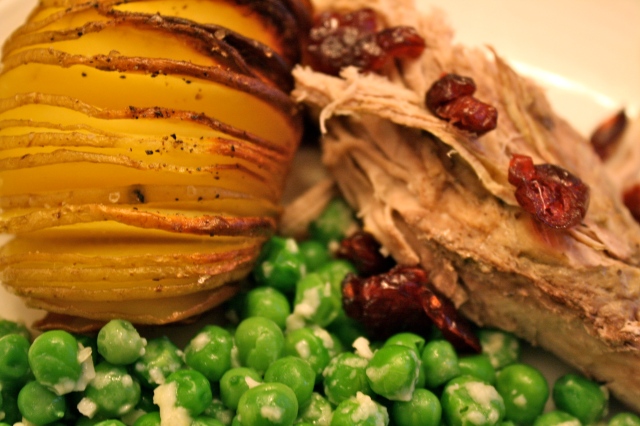 This was my first time trying to make hasselback potatoes, and I have to say, it was fun and I think they turned out well! They were a perfect cross between chips and baked potatoes. I followed this recipe, which made for some very salty, buttery potatoes. Yum!

I finally got to use my new Dutch oven over the weekend! I was so excited. With it, I made French Onion Soup. My absolute favorite French Onion Soup comes from Panera Bread, but I had been wanting to give it a go at home for quite some time. So, with Dutch oven in hand (actually not really, that thing weighs a TON), I set to work. 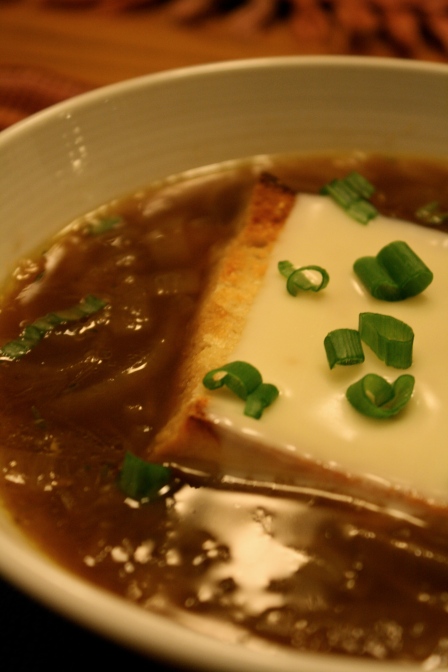 I didn’t really follow any recipe in particular, so here is a rough one for you:

– 4 slices of bread (I used ciabatta, but I think sourdough would be super good! Use gluten-free, if needed)
– Margarine, for bread
– Parmesan cheese, for bread, optional
– 4 slices of cheese (I used Swiss, but something sharper would work best)
– Chopped scallions, optional for plating

While I thought the soup was pretty good, I discovered it would make for a very good side dish or “half-meal”. That is to say, I should have eaten it with a sandwich or salad – it was just not filling enough on it’s own. Lesson learned!

Well, you probably already know what one of the desserts was:

Another delicious dessert that I made were these homemade Mounds bars. The recipe will be up pretty soon, but basically it was a soft coconut filling covered in dark chocolate. Let’s be real: how bad can that be? 🙂

In other news, before I forget, I just wanted to apologize to those of you who got a random email of my homemade fudge recipe. I had gone back and slightly edited the page, and for some reason, it sent it out again. So, if you were wondering why I was talking about St. Patrick’s Day in January, that was why. 😛

And to wrap it all up (not that this has anything to do with anything mentioned above), I finally saw Les Miserables on Thursday! Ohhhhhh my gosh it was so good. I would gladly go see that movie another time in theatres, and I will definitely be buying it when it comes out! 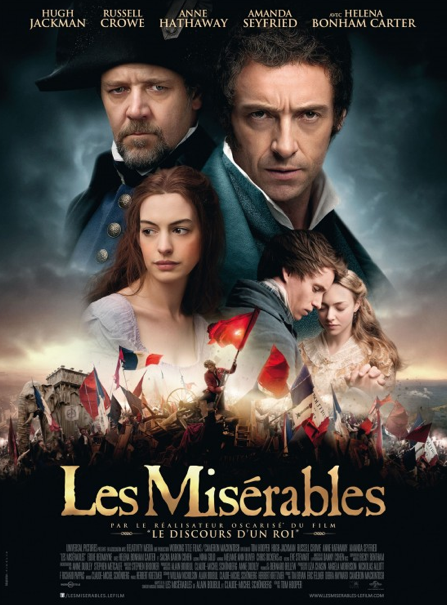 The only thing I will say, though, is that one really has to be into, or at least ok with, stage musicals. In stage musicals, they are singing almost constantly, but movie adaptations usually have dialogue punctuated with songs. The director stayed true to the musical, and I think there were probably only two or three lines of talking in the whole movie. At first, it was kind of annoying, but I quickly got over that and was wholly very impressed with it. It takes a lot of courage to do a movie like that (with live singing, too!), so I really appreciated the fact that they were really taking a risk. Even then, during the times the singing started bothering me, I just decided to focus on the cinematography (which was beautiful – I love that director), the acting, the sets/background, or the costumes. If a movie has that many aspects to focus on, it’s definitely worth seeing, in my book. So if you haven’t yet, and you’re very much a fan of musicals, go out and see it!

Anywho…other than all of that, I really don’t have much else to talk about, so I will end awkwardly and wish you all a good day! 🙂