I have a kinda funny story.

On Sunday I felt like experimenting in the kitchen. I wanted a nice, autumnal dessert that was also somewhat light/healthy. It’s “lightness” would be good for both me and my family and also What Would Kathy Eat?‘s Healthy Thanksgiving Challenge.

Because I had already made something with pumpkin in it earlier that day, I decided that a recipe with apples was in order. Apples = fall.

I had just pulled these apple crumbles out of the oven and was gearing up to take pictures of them when BOOM – the power went out.

The good news? I had gotten all of my hair straightened (that would have been a nightmare…can you imagine???) before we lost electricity and the crumbles were hot and cooked through. The bad news? I had to take pictures of these cute little desserts by candlelight, which didn’t really turn out so well (see below).

Oh well. Our power came back on in the middle of the night, and in the grand scheme of things, I had/have absolutely nothing to complain about!

Notes:
– I used the glass jars because I thought they were cute, but also because they provide perfect portion control. If you don’t have any, you could use little ramekins or simply bake it up in a larger baking tray.

– You could leave the skin on the apples if you want to. I didn’t simply because I’m not a huge fan of the texture the skin gets after it’s baked.
– If you can’t find the Apple Cinnamon Chex, use Rice Chex. If you can’t find Chex at all, you could use crispy rice cereal, rice flake cereal, or something of a similar texture. If none of those are an option for you, increase the amount of oats in the recipe!
– To make this recipe gluten-free, use GF flour!
– I realize that the addition of 2 tablespoons of butter isn’t exactly “light”. However, I couldn’t figure out how to make a crumble topping without it. Sacrifices in the name of taste. 🙂
– Putting the jars on a foil-lined baking sheet helps prevent mess (just in case the crumble or the juices from the apples spill over) and also makes it easier to pick up the jars!

Here is a picture by candlelight. I had to use flash, which I’m not a fan of, but I think you get the idea. And they were still delicious! 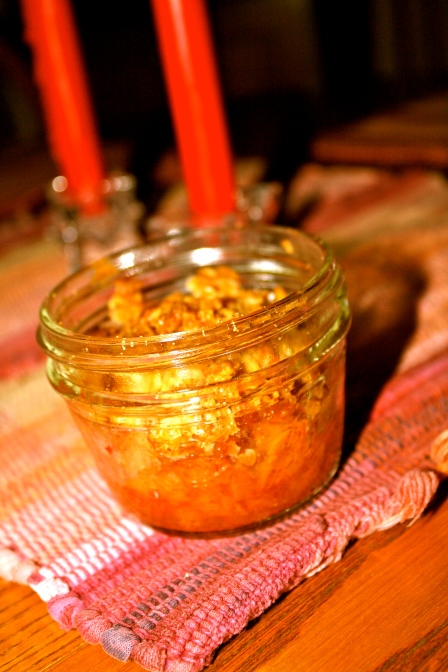 My dad was amazed at how good the crumble was. He couldn’t stop talking about it. My brother and mom felt the same way, and everyone was surprised when I told them it was “light”. 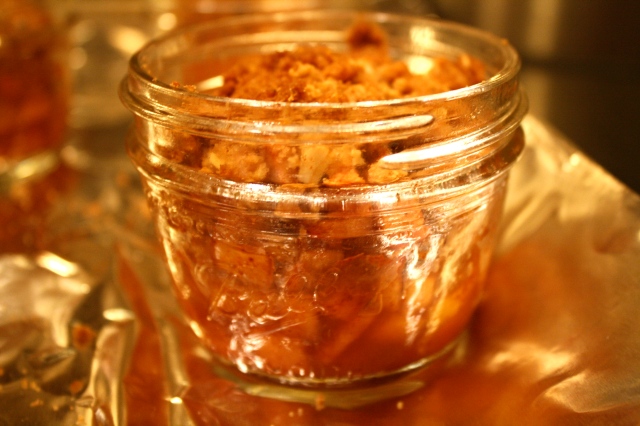 I hope you try these individual apple crumbles verrrrrry soon…they’d make a perfect Thanksgiving dessert! That’s what I’m doing with them, anyway. 🙂 Have a great day!