Welllll I am slightly behind on my recaps of studying abroad, which is a bummer, because I was having such a great time a year ago! As I mentioned before, I was so lucky to have so many visitors while in England. My dad flew over with me in September, one of my best friends, Sarah, came over for a few days of fun, and my mom arrived near the end of October – and stayed for a week!

Most (if not all?) of the universities in the United Kingdom have what they call “Reading Week” or “Enrichment Activities Week”. It comes about halfway through the semester, and was designed to help students take a break from lectures and catch up on reading, essay writing, and other assignments.

You can guess how many people actually do that. 😉

By a stroke of amazing luck, my mom had the exact same week off of work! I still can’t believe it happened like that. So, she flew in to Heathrow on Sunday, October 30th, and stayed through the 6th of November.

Obviously, because I had no need to be in Kingston near the university, I stayed with her at the amazing Marriott Hotel in Twickenham. (A note: if you’re ever going to be in the London area but don’t necessarily want to/need to be in London, this hotel was perfect. It was about 20 minutes by train outside of the city, and there was a Tesco [grocery] a short walk away. Plus, the staff was very nice and helpful, the hotel was clean and comfortable, and the bus stop was right outside the lobby!)

During the first few days my mom was in the country, we mainly just explored London and the area around it. The very first day, after my mom napped off some of the jet lag, we headed out to explore Twickenham and find dinner. 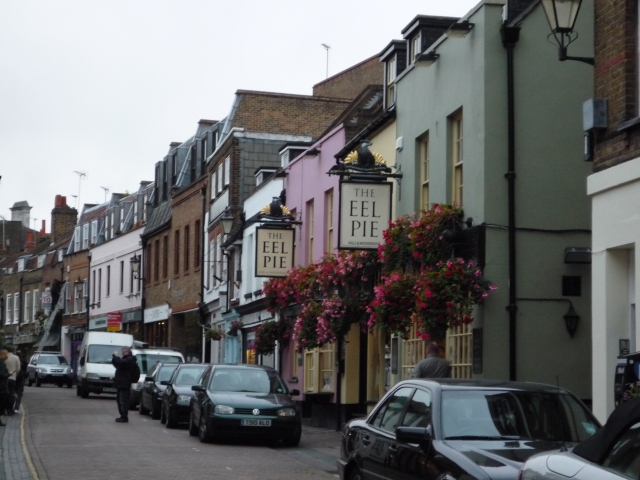 We ended up having dinner at a place called Osteria Pulcinella. Yep, authentic Italian food for my mom’s first evening in England! 😛

I ordered the funghi risotto (mushroom risotto), which was very good. A bit too salty, but it was warm and filling and had lots of great flavors going on.

My mom ordered their Ragu sauce over spaghetti. Ohhhhhhh my goodness. This was without a doubt the best pasta dish I had ever tried. She kept raving about it but my expectations were still blown out of the water when I had a bite. It was soooo good!

In fact, we both loved it so much that we went back again during that week just for that pasta dish! 🙂 I just checked the menu, and, unfortunately, it doesn’t look like it’s on there any more, but boy was it amazing.

The next day I decided to show my mom around Kingston. It was something I was really looking forward to, especially since I knew it so well at that point. But, before we headed out into the humidity and ruined our hair, my mom asked the concierge to take a picture of us. 🙂

I didn’t take too many pictures of the town that day, so if you want to check out some of the beautiful Kingston sights I showed her, head on over to this or this post!

For dinner, I ended up taking her to what was quickly becoming my favorite pub in town: the Druid’s Head. This time, she ordered the fish and chips – that’s a bit more British! 🙂

Ummmm look at the size of that meal! We were both joking that it was more like a whale than a fish! 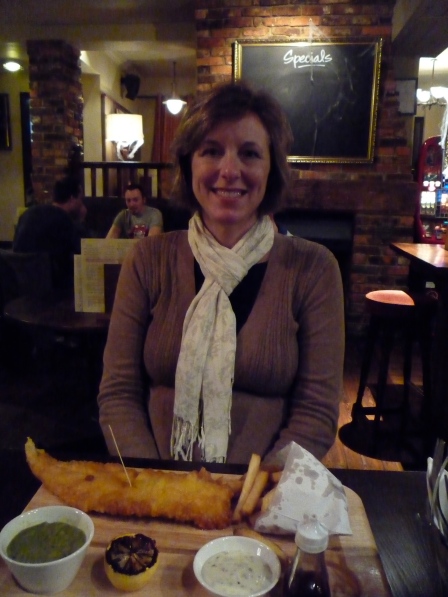 It was so much fun showing my mom the town I had called “home” for almost two months. It was actually Halloween that night, so as we rode the double-decker back to Twickenham, we saw a whole bunch of families out Trick or Treating. It’s so interesting to celebrate holidays in different countries.

The Roads: Abbey and Portobello

The next day, my mom and I headed into the city. Before Reading Week, I actually hadn’t had the chance to just spend a day out in London and explore the city. It was great that the both of us had a few free days to spend doing just that! My mom brought Rick Steve’s Guide to Great Britain with her, and we had spent the night before combing over the book, decided where we wanted to go.

However, we didn’t need the book to help us make a decision to go to one place: Abbey Road.

I’ve mentioned before on LLL that I am a huge Beatles fan. Well, I get it from my mom. Actually, we’re borderline obsessed. What better place to go than their famous London studio? 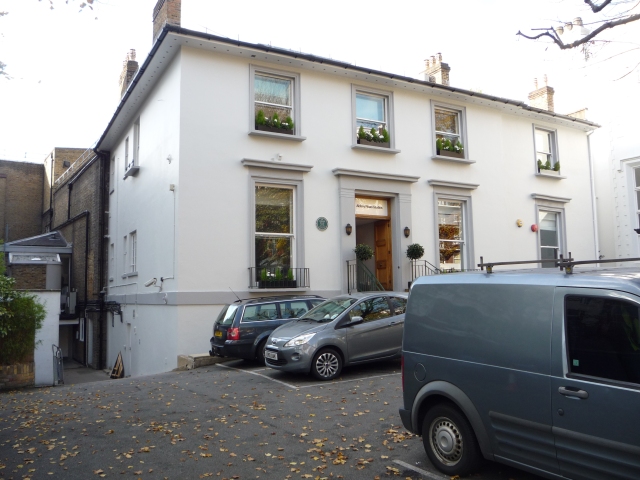 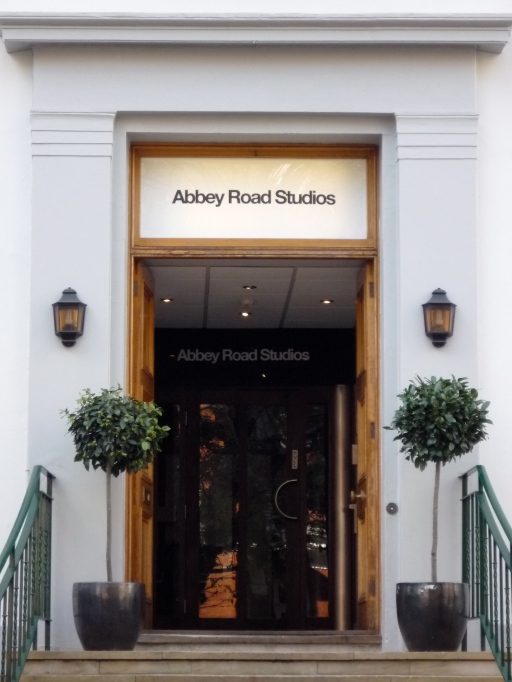 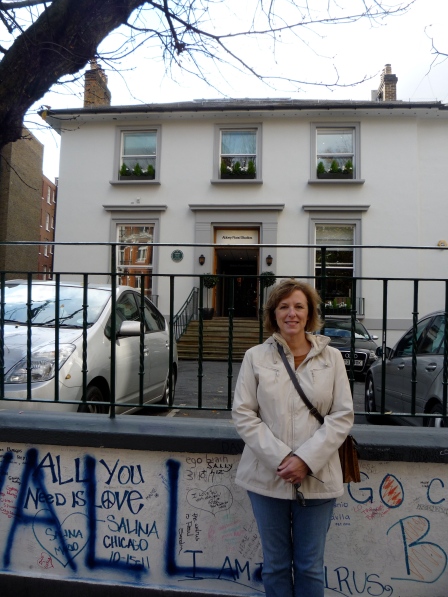 Our whole family had been there before (four years before I studied there), but it is still just such a cool place for a couple of Beatles fans. Abbey Road:

In London, those striped paths on the streets are called “Zebra Crossings” and they’re for pedestrians. Londoners are usually very good about stopping at the crossings and letting people walk by. I didn’t explain that before posting the following picture on facebook….

….and this was my brother’s response:

Hahaha! That cracks me up every time! 😀 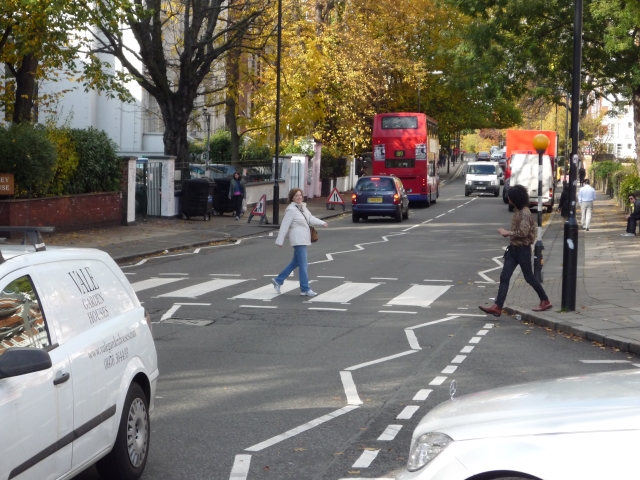 The next stop was just a few streets over. We had read in the book that Paul McCartney’s London home was very near the studio. The book said to be discreet; to avoid looking like stalkers (there is a difference between that and what we were doing!!), I quickly snapped a picture and we moved on. 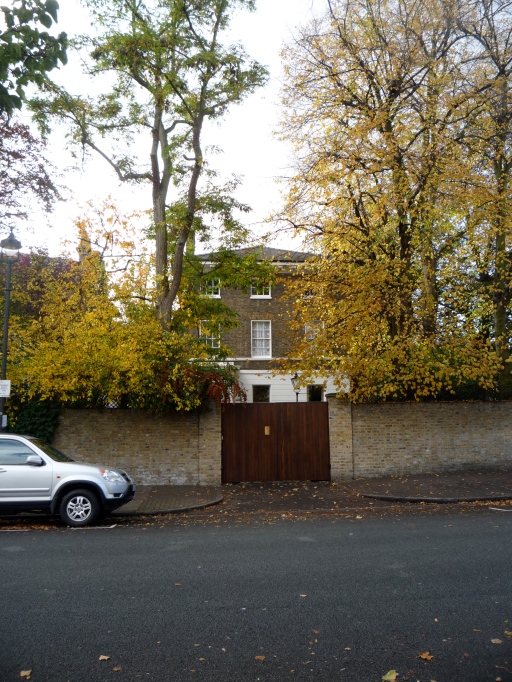 I really loved that area of London. It’s pretty far north, but still within the city, so it is more of a residential area than tourist. The leaves were just starting to fall, and it was a cool, sunny morning. It was just perfect for enjoying some time with my mom in the city I love!

Our next stop was Portobello Road market. 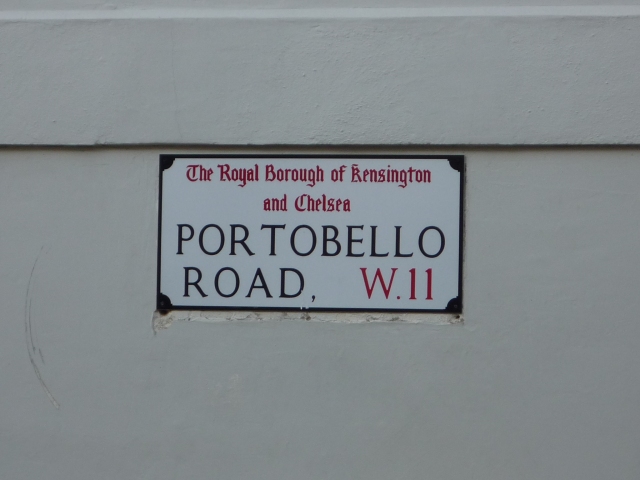 I can’t look at that sign without getting the Mary Poppins song stuck in my head!

I didn’t end up taking pictures of the market itself (that’s another post!) but did get some of the surrounding houses and streets. It was all so colorful and fun! 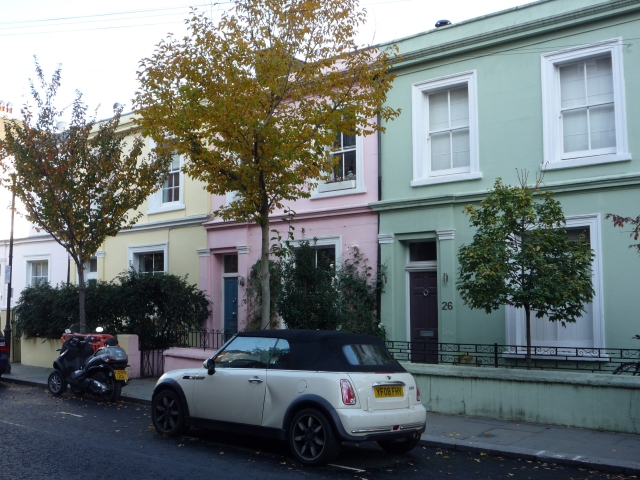 ^ Note the car. I will have one of those at some point in my life. I will.

My mom, her sister, and her mom all love to sew, so we poked our camera into this shop that was full of antique sewing machines. sew cool! (Bad joke.)

After walking around Portobello Road, we headed in a different direction to explore more of London. Come back soon for a recap! I hope you enjoyed the pictures! 🙂