Hi! How is your day going so far?

This week has been very fast for me, despite what I first imagined. It was sooooo difficult getting out of bed at 5:45 on Monday morning after break. Trying to get stuff done this week has been equally challenging! I’ve had a taste of vacation and my mind does not seem to want to do three weeks of work before the next! 🙂

I honestly did not do much over break. On Wednesday, I babysat for my neighbors. The three kids were all sick, and I was so nervous I was going to catch something. So far so good. On Thursday, we enjoyed some family time and had this amazing feast. Friday was another relaxing day: I woke up, did some yoga (I don’t do that Black Friday thing), and watched four movies. That’s kind of embarrassing to admit, but I will say, it was fun! Saturday and Sunday were more of the same thing, but I did have an essay due Sunday night which I worked on. What did you do on your vacation, if you had one?

While I had a lovely vacation from everything, I have to say, it’s fun to be blogging again. 🙂

I’m actually going to include in this post some of my favorite eats from the past two weeks, since I didn’t post a WIAW last week. It was sooo nice being home for such a long time because I could be more creative with my food. I love that! (There were other reasons it was so fun being home, too, obviously. 😛 )

Thanks again to Jenn for hosting WIAW!

I have been enjoying plenty of this combination the past couple of weeks: 0% fat Greek yogurt + Special K red berry + raisins. SO GOOD.

The other amazing breakfast that I made was this:

Apple Cinnamon Breakfast Quinoa. Expect a recipe soon! It was so delicious, warming, and filling.

I also had some seriously delicious lunches! This one was just a packet of tuna, peas, Craisins, a bit of yogurt, and some lemon juice mixed together. I was surprised how good it was! 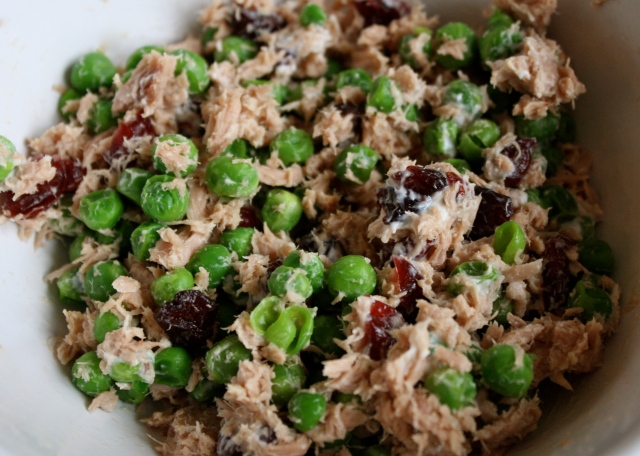 We had enchiladas a little while ago (see dinners below), and ended up with some extra filling (and no tortillas), so I turned it into a sort of single-serve casserole: 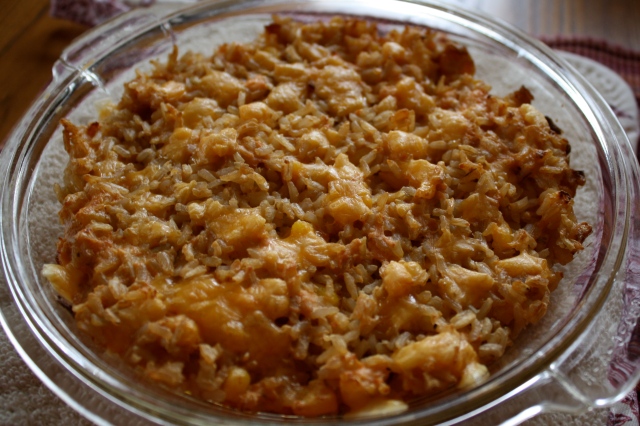 The first time I made it was with brown rice. I mixed together the rice and the enchilada filling, popped it into the toaster oven for about 15 minutes, then tore up some cheddar cheese and toasted it some more. Ohhhhh my goodness it was incredible! I enjoyed some mixed veggies on the side both times I made the “casserole”.

The second time I made it, I used quinoa. I also threw in some spinach, for good measure. 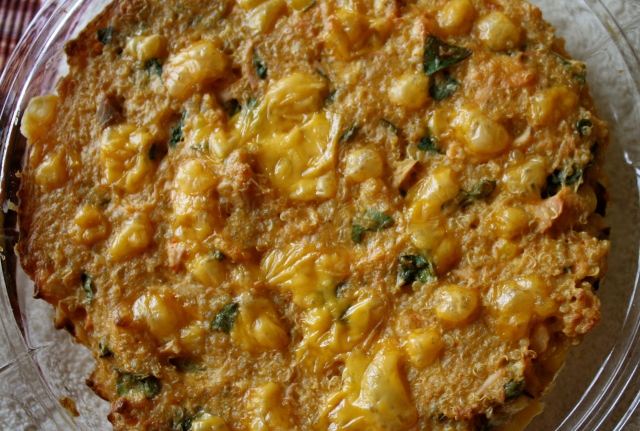 This version wasn’t as good as the first, but it is definitely a dish I am looking forward to making again!

I have to admit: I was reallllly bad about snacking this past weekend. There is so much good food at home (that I can’t afford to buy or have around up at school) and I found myself going crazy with the tortilla chips, leftovers, and other munchies at times. Oy.

The snacks that I did snap pictures of included this amazing cranberry-studded English muffin.

A Christmas blend Starbucks was on the menu as well.

The lighting in this picture was awful, so I decided to redeem the pic by adding some artsy effects. 😛

My stomach did not appreciate the drink, so I had to call it quits after about 1/4 of it, but it was still delicious! 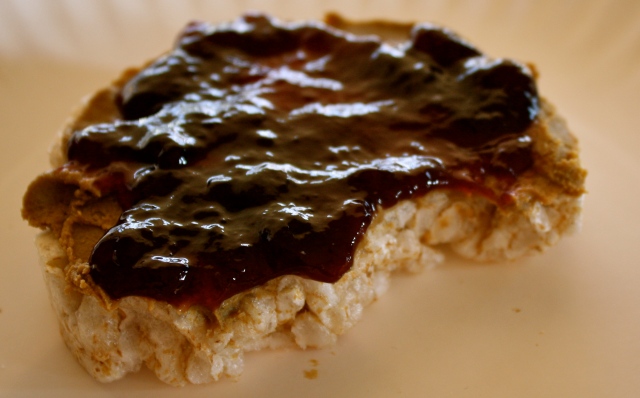 As well as about a hundred clementines. Clementines are such amazing little fruits: the moment that I start to get depressed that summer berries, watermelon, and other delicious fruits are gone, ta-da! It’s clementine season! (But I don’t joke: in the past three days I have had nine of these babies.) 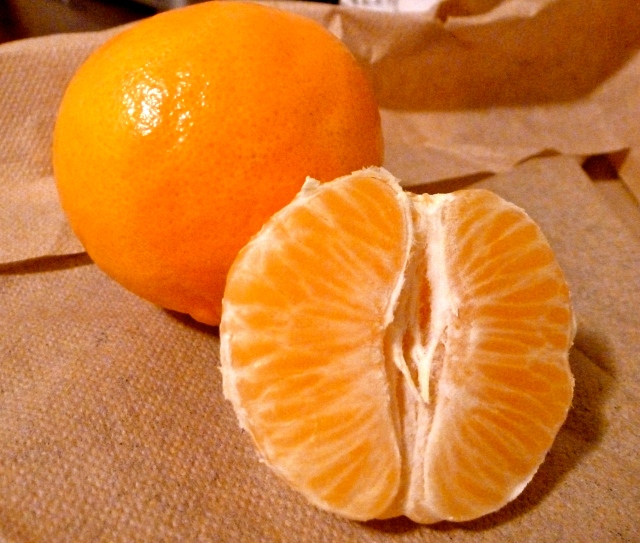 Other than the amazing food I enjoyed on Thanksgiving Day, I’ve had some pretty good dinners lately…

About two weeks ago Dan and I went to Benningan’s for dinner. I ordered this grilled salmon, which came with a rice pilaf and steamed broccoli. Yum yum yum. 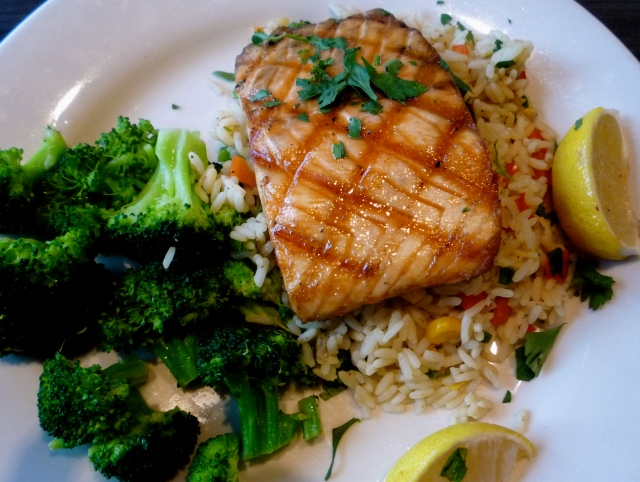 As I mentioned, my mom made up some enchiladas a while back, which were great as usual.

This is another recipe that I need to post. I’m making a list of all of the recipes I talk about uploading!

On Sunday night, I made some Skinny Chicken Parmesan (again; we can’t get enough of this meal!), only this time I didn’t put the marinara on the chicken.

I apologize about the quality of these pictures – I blame poor lighting!

The result was amazing – the panko/cheese crust was so crispy and delicious. Good stuff. 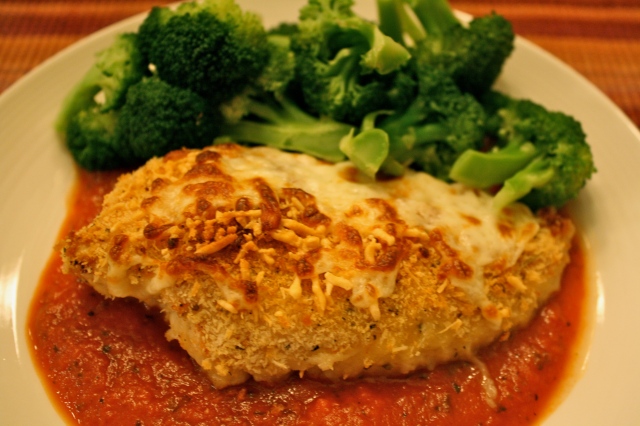 With a leftover parmesan chicken breast, I made this fantastic salad. I chopped up the chicken and added it to a bowl of mixed greens, Craisins, and cucumber, and topped it with balsamic vinegar.

On the side I had some baked ziti that my mom made with these noodles:

They’re gluten-free and made mostly of quinoa and brown rice. There is next to no difference between these and wheat noodles taste-wise, but obviously there’s much more protein!

On the same night we went to Bennigan’s, Dan and I went out for some frozen yogurt. They were out of the raspberry, so I went with chocolate/vanilla, and topped it with crushed Oreos, sprinkles, fresh raspberries, and hot fudge. Mmm.

On Saturday I made these pumpkin muffins. I coated the top with melted butter and cinnamon-sugar, which made an amazing crunchy topping. I’ll post the recipe soon!

What with all of the eating that I did this past week, I really need to kick it up in the exercise department. Obviously, this is only half of the equation (I also need to eat less and healthier), but I love exercising, so I’ve put more minutes into my plan for this week.

In other news, my camera broke. 😦 It’s a little Lumix camera that I’ve had for about four years, and one day I turned it on and it went all crazy, zooming in and out then shutting off. And when it does shut off, the lens doesn’t retract. I don’t usually use that camera for food pictures (I use my dad’s or brother’s) but I’m still super bummed about it. I’m going to take it to a camera repair shop and see what the verdict is.

I don’t really have much else to talk about. I’ll be back with a recipe tomorrow (I’ll also reblog my post from last year about Hyde Park Winter Wonderland!) and then a recap of my trip to Switzerland on Friday and Saturday! Wahoo!
Have a wonderful Wednesday! 🙂